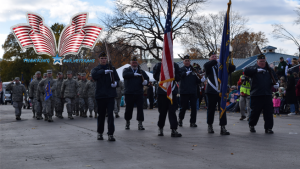 Amy Robbins and Rick Roberts were able to accompany some 80 veterans and their caregivers on Honor Flight Syracuse Mission 14 back on September 28th 2019. Honor Flight Syracuse serves ten counties in the greater Central New York area by flying our local veterans to Washington DC to see the memorials honoring those who served our nation.
Each day this week, we will be featuring a veteran who had a chance to talk with Amy about their experience in the military, as well as how much Honor Flight means to them.