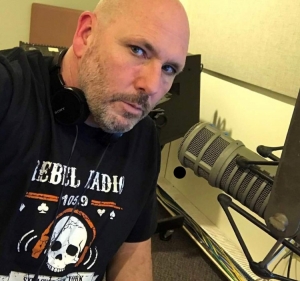 Drew’s first taste of radio was at SUNY Oneonta’s neighboring campus station WRHO, where his musical versatility and wide knowledge base took shape. Pursuing his dream and devotion to radio, Drew answered an ad for a Sales position with the early Alternative station WLIR/WDRE (of “Dare to be Different” fame) and later with NYC’s K-Rock (FM home of radio titan, Howard Stern). It was there that he became accustomed to the inner workings of the business, which ultimately led him to moderate the reality talk show, Steppin’ Out. He later became weekend host of the Progressive station WEHM, Drew engaged his listeners with conversational tidbits from his eclectic database of musical knowledge. He is looking forward to his new radio home in CNY on The Rebel Rocks!